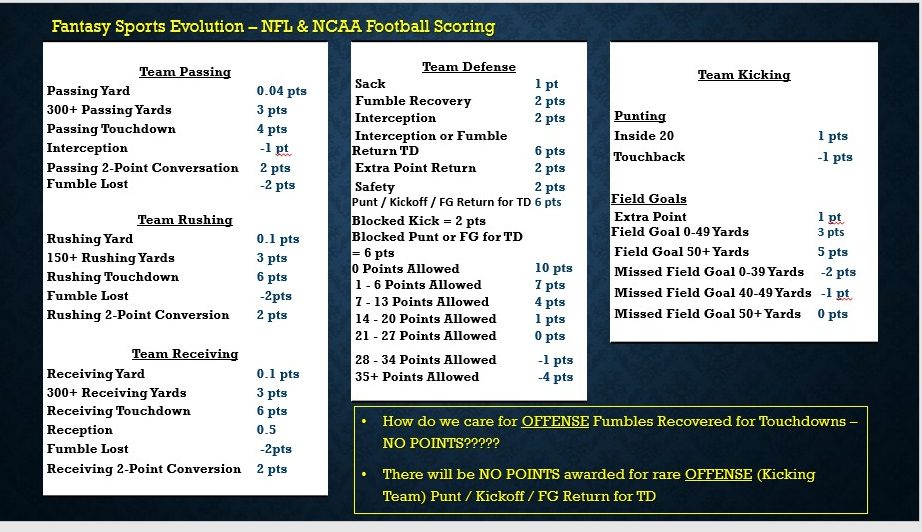 You will receive points for any postponed games that are played no later than Wednesday of that NFL week.

Example: If a game is supposed to be played on Sunday September 10th, but is postponed and played no later than Wednesday September 13th, you will still receive points for the game.

If a game is postponed to a later date (i.e. after Wednesday of that NFL week) or called off for any reason, any players from that game who remain in your lineup will receive zero points.

If game cancellations and/or postponements mean there would only be one game included in a game slate, then the drafts will be cancelled and all entry fees will be refunded.

A game is considered suspended if it is unfinished, but to be completed in the future. At a minimum, the statistics compiled prior to the end of the games slate will count towards your team’s points. You will receive points for the remainder of the game if it is played no later than Wednesday of that NFL week.

Live scoring and projections are strictly for your enjoyment. We wait for official scoring to be complete before we close drafts, complete payouts, and move the drafts to results.

The scoring in this game type is EASY!

It consists of combining your Best 5 Scores out of the 8 Golfers you selected.

If a fantasy player does not have 5 players to make the cut, we eliminate them.
So, you should have 5 scores to have a chance to win.

So, the lowest 5 scores in this example are the first 5. So the total score will be -14. User with the lowest score in this game type is a winner.  So, after the 2nd round, let’s say that Phil Mickelson, Adam Scott, Henrik Stenson and Bubba Watson all missed the cut. In this case your entry will be eliminated, or you just won’t have any chances to win.

Postponed rounds will only be counted if they are completed before the Wednesday following the start of a tournament.

If a tournament is suspended after rounds have been played, and it will not complete within a week from the event start date, the game will be marked complete and the future scores will not count towards settlement.

Live scoring and projections are strictly for your enjoyment. We wait for official scoring to be complete before we close drafts, complete payouts, and move the drafts to results.

The objective of this game is simple – select the winner of each game throughout the week by picking team you believe will win.  Total number of correct picks/winners – WIN.

Experienced: Players with a black shield over their avatar have entered 500 total drafts OR have played 6+ drafts AND Won $2500 or more.

Highly Experienced: Players with a red shield over their avatar have entered 1000 drafts OR won 4+ $1000+ prize drafts.

There are different rules for ties depending on the contest type.

For H2H contests, ties lead to an equal split in prizes, with no commission taken. An example of this would be:

For Multiplayer contests, ties lead to a split in prizes between only the players that tie. An example of this would be:

For tournaments, prizes are never split. Each matchup has a definitive winner. If the scores are tied at the end of a contest, the tie will be broken by:

Roster Rules vary depending on the sport & type of contest.

See Scoring for each Game Type for Roster Rules.

Fantasy Sports Evolution prides itself on fast pay-outs – however – we always triple check all scoring and gameplay before doing so.    Contests are paid out at night after all teams / players in your contest have completed their games and official scoring is final.

Players can withdrawal their money at any time via the APP or website if their balance is $10 or greater.  Players can request their withdrawal via PayPal or by a Mailed Check.

To conduct a withdrawal, go to settings and click withdrawal.

Fantasy Sports Evolution strives to process all withdrawals within 48 hours.  If you do not see it in that time frame, please reach out to support@draft.com.

XXXXXX Please note that we first refund back to the method of deposit if the option is available and then send winnings through your desired method of withdrawal. If you deposited with PayPal, you’ll see the refund instantly upon processing. If you used a credit card to deposit, you will see the refund reflected on your statement in 1-3 business days from date of processing.

XXXXXX you no longer have the card you deposited with please email support@draft.com and notify the team of this prior to withdrawing. If the email is not sent prior to withdrawing and a refund is issued before you send the email, it is the responsibility of the user to recover the funds where they were refunded.

XXXXIn order to be approved to have your funds sent to a source other then the one you deposited with you will first have to play through your last deposit by entering contests. If requesting to another PayPal account that account will also need to be in your name.

XXXeChecks will be sent to your verified Fantasy Sports Evolution email 2-3 business days after your withdrawal is processed.

XXXAll withdrawals are subject to anti-fraud checks on playing patterns and deposits prior to processing. We reserve the right to hold a withdrawal if suspicious activity is detected.

XXXXPlease limit yourself to 5 withdrawals per month. More than that may be subject to a $5 charge per withdrawal.

Fantasy Sports Evolution has the discretion & reserves the right to cancel any contests.